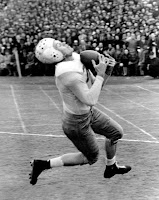 Max Lucado writes in his book, "Fearless", about Noble Doss, a football player for Texas from 1939 to 1941. He is best known for the "Impossible Catch" that upset undefeated Texas A&M in 1940. He also set a Texas career interception record with 17. But what he remembers the most about his football was a ball he dropped against Baylor in 1941 that possibly cost Texas a trip to the Rose Bowl. In an ABC interview, you can still see his pain as he remembers how he let his team down. You can see that interview at Tribute to Noble Doss. Lucado concludes with, "Memories of dropped passes fade slowly."

The story of Fred Snodgrass is a similar one. Snodgrass hit a career high .321 in 1910, his first full season with the Giants. In 1911-1913, he played in three consecutive World Series, but the Giants lost all three. In the second, the 1912 Series, Snodgrass committed one of the most famous errors in baseball history. In the 10th inning of the deciding game, Snodgrass, who was among the National League's best outfielders, dropped a routine fly ball that put the tying run on second base. He proceeded to make a spectacular game-saving catch on the next play, but the Sox went on to score two runs in the inning to win the series. The error became known as "Snodgrass's Muff" and also the "$30,000 Muff." His error remained with him to the end. When he died on April 5, 1974, his obituary in the New York Times was headlined "Fred Snodgrass, 86, Dead; Ball Player Muffed 1912 Fly" (source Wikipedia).

In sports, there are so many stories that could be told about dropped passes and muffs, and who doesn't enjoy watching sports bloopers or American's Funniest Videos?

People fall down and we laugh.

But dropped passes go beyond funny bloopers and falling down. We drop them personally, professionally, relationally, and spiritually. If you haven’t failed, you haven’t lived. Success involves risk and with risk comes moments of failure. If not dealt with, we will live our lives in regret. If we are going to live in success, we must learn to deal with our failings, which can haunt us for our entire lives.

I am amazed at how many people mess up every new day with the regrets of yesterday. This is one of the best weapons Satan uses to keeping us from our future potential. For most of us, he doesn't even need to work very hard.

Along with the thoughts from a previous blog, "The Unforgiving Minute," let me offer a two more suggestions for overcoming failure. The first one is the best - No matter what we do, Jesus is still our friend. Just like Jesus reinstating Peter along the sea after Peter denied knowing him, Jesus reaches out to us and restores us with mercy and grace.

If you haven't seen the movie, "The Boy in the Striped Pajamas," I highly recommend it. It is the story of an eight year old, Bruno, who is the son of an SS Commanding officer in charge of a prison camp. Bruno befriends another youth, strangely dressed in striped pajamas, named Shmuel who lives behind an electrified fence. One day Shmuel is brought to the house to clean the glasses of the officer's household. Bruno offers Shmuel some tasty treats. As Shmuel is devouring this gift, a soldier comes in and accuses him of stealing. When Shmuel says that he received the food from Bruno, his new friend, Bruno is afraid and denies ever seeing Shmuel before. It is a scene of fear and rejection.

For days, Bruno comes back to the prison fence to look for Shmuel, and one day he sees him again. This time Shmuel looks different. His face is swollen and his eye is back and blue from being beaten. Bruno repents and seeks friendship again. Slowly, Shmuel looks up and extends his hand through the fence and Bruno is forgiven.

It’s a picture of Jesus and us. Although we let him down and turn our backs to him through times of failure, he still extends his hand to us in order to restore the relationship.

Secondly, don’t let your failure determine your destiny. You have to keep the big picture in mind. Abraham Lincoln, Lucille Ball, and Michael Jordan are all success stories that first began with failure. For a great video on this, go to http://www.bluefishtv.com and search for “Famous Failures.” Or better yet, read the Bible, which is full of great leaders who failed and were used mightily by God.

In a recent fortune cookie I read, "He who never makes a mistake never did anything that's worthy." In that case, I have done many worthy things.

Other quotes on failure:

There are two kinds of failures: those who thought and never did, and those who did and never thought. - Laurence J. Peter

Success consists of going from failure to failure without loss of enthusiasm. – Winston Churchill

So... Failing is inevitable in life. It’s what you do afterward that counts.

For other thoughts on failure, go to The Unforgiving Minute

For more quotes on failure, well, just use Google search :)